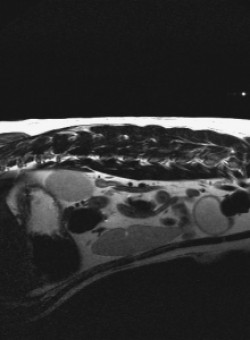 The adrenal glands in both cats and dogs are very well demonstrated using MRI. In both species the adrenal glands lie just to the medial aspect of the cranial pole of each kidney. The right gland lies between the kidney and the caudal vena cava while the left lies between the kidney and abdominal aorta. On sagittal examinations of the Lumbar spine both are often seen at the level of the coeliac and mesenteric arteries (L1-2).

The animal will sometimes be cushingoid but some tumours don’t result in Cushings disease (depending on the cell type involved). Tumourous glands will often be markedly enlarged but also look out for loss of differentiation between signal from cortex and medulla. In adrenal dependant Cushings disease, over secretion of the affected gland can lead to atrophy of the contra-lateral side so don’t be surprised if it’s difficult to see the ‘normal’ adrenal.

Case 1 shows a dog with Cushing’s disease. Ultrasound examination of this dog was said to have shown a normal left adrenal with the right being absent or difficult to demonstrate.

MRI (below) clearly demonstrated a small but normal right adrenal while the left is slightly enlarged and shows a clear loss of signal differentiation between cortex and medulla.

T2 weighted Transverse images showing normal (R) and abnormal (L) adrenals of the same dog. Note the higher signal medulla and lower signal cortex of the normal side. This differentiation has been lost on the left side which is also enlarged.

It’s not uncommon for adrenal tumours in dogs to invade the caudal vena cava. This clearly has significant implications for potential surgical procedures and MRI is the ideal imaging tool to demonstrate caval infiltration. Case 2 shows limited invasion of the vena cava whilst Case 3 shows extensive tumour within the vena cava. 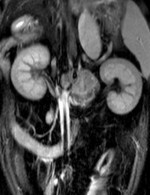 This dog was referred for MR Imaging on the basis of having an ‘abdominal mass’ on ultrasound.

The T2W transverse image (right) shows a left adrenal mass filling the vena cava. The T2W sagittal image (left) shows most of the mass lying within the vena cava. Note the normal right adrenal lying dorsal to the mass on both images.