The prevalence of primary prostatic cancer in dogs is low (0.6% at necropsy), occurring more frequently in older dogs with a mean age of 9.9 years.

Most primary prostate cancers are aggressive and highly metastatic, the most prevalent type being prostatic adenocarcinoma. Tumour growth outside the prostate is common, as are pulmonary and bone metastases. Other symptoms witnessed may include:

Dogs with metastatic spread are more likely to present with primarily neurological symptoms such as:

Lung metastases are found to be present in 44% of cases at diagnosis.

A 7-Year old Scottish Terrier was referred for MRI imaging of the thoraco-lumbar spine. The clinical presentation was of acute onset of hindlimb lameness over the preceding 3-4 weeks with hyporexia and lethargy. Localised pain was noted in the L6 region on clinical examination.

Initial sagittal imaging of the thoraco-lumbar spine revealed infiltrative lesions in the L5 and L6 vertebral bodies. These lesions were evidenced by marked cortical lysis of the ventral aspect of the vertebral bodies and displayed ill-defined T1 hypointensity when compared to normal bone marrow, and heterogenous mixed T2 intensity. 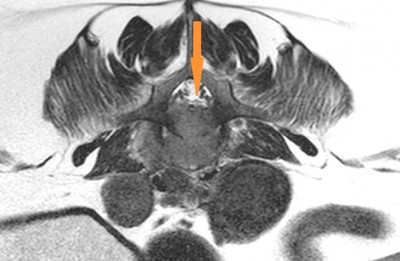 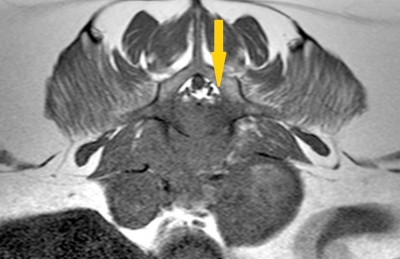 Dorsal STIR imaging throughout the T/L Spine, abdomen and lower half of the thorax revealed the presence of multiple rounded hyperintense lesions spread throughout the visible lung lobes, varying in size from 3 – 13mm. These lesions were indicative of metastatic deposits (White Arrow below) 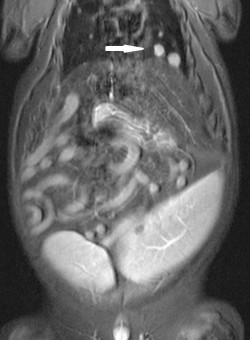 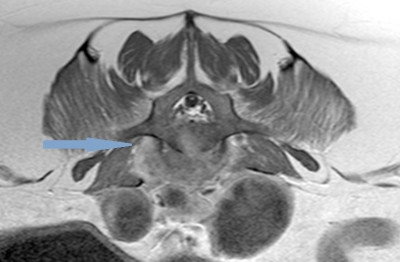 Dorsal post-contrast T1 Fat Saturation imaging revealed extensive enlargement of the para-aortic and internal iliac lymph nodes, with a heterogenous rim-enhancement (Pink / Red Arrows). Additionally, the prostate gland is markedly enlarged with capsular thickening on the right side and heterogenous contrast enhancement, most noticeably on the rim (Purple Arrow). 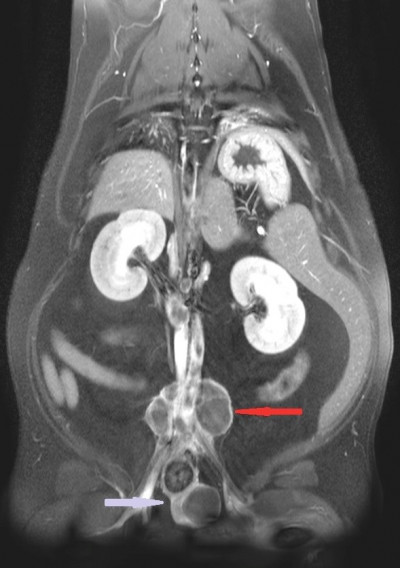 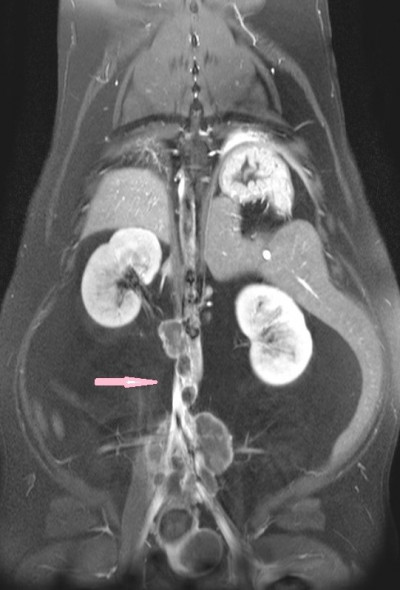 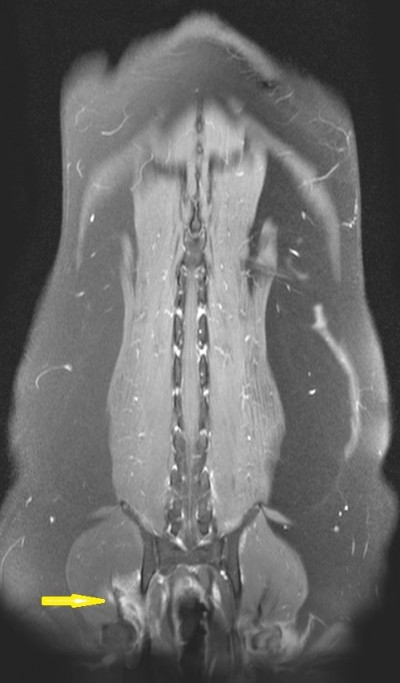 T1 transverse post-contrast imaging through the pelvis better illustrates the cystic nature of the prostate mass, as well as the degree of wall thickening previously described (Cream Arrow). 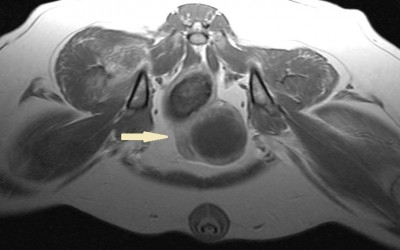