A two-year old, female, neutered cat presented with an unsteady gait and difficulty in defaecation which was only temporarily relieved with anti-inflammatory medication. The behaviour of the patient suggested diffuse pain of unknown origin and general discomfort. An MRI examination was indicated, as a neural defect was suspected, and this modality has the best results when visualising soft tissue.

Vertebral angiomatosis occurs more commonly in dogs, although there have been cases reported in the feline population, usually in cats of less than two years old. This condition has been described as a proliferation of arterial and venous blood vessels, the concentration of which manifests as an extradural, benign structure causing compression to the spinal cord. These are more commonly found in the lower thoracic and lumbar regions are widely considered to be a congenital, intra-osseus vascular malformations.

This T2 weighted Sagittal sequence shows a significant lesion at L5 vertebral level, equal to the complete height of the spinal canal. The lesion shows diffuse character, with patches of slightly hyperintense signal to the spinal cord visible in this slice. 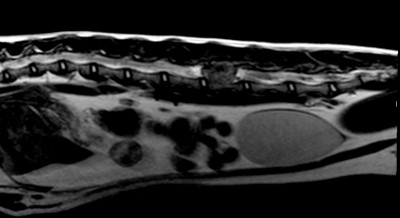 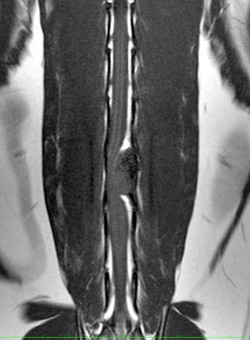 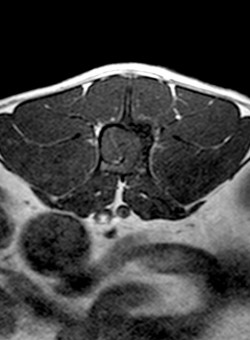 These dorsal and transverse T1 weighted images show significant lateral displacement of the spinal cord. In the dorsal image the angiomatosis is very well differentiated and represents a rounded structure compressing the spinal cord to the left. On the transverse image a fine filament of high signal can be seen demarcating the spinal cord from the lesion. This demonstrates the layer of fat that confirms the extradural nature of the growth. 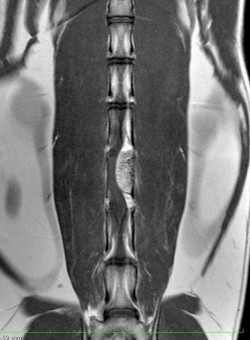 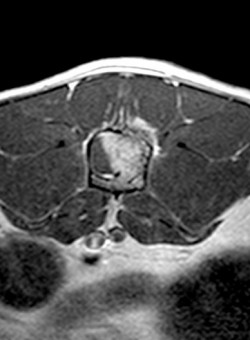 The dorsal and transverse T1 images post contrast show fairly, homogenous enhancement of the lesion. In the transverse image the progression of the enhancement is halted at the epidural fat, described in the pre-contrast images.

A right-sided hemi-laminectomy was performed on the vertebral arch of L5 and the lesion, which was described as a ‘jelly-like’ mass, was removed. The bleeding was halted, and the wound closed. The bone sample was sent for histopathology where a benign profusion, containing proliferations of arterial and venous vessels was identified, consistent with a diagnosis of vertebral angiomatosis. The cat regained normal gait and bowel function around 12 days following the surgery.