MR Imaging of facial swelling in a dog 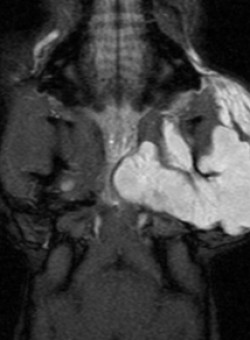 MRI is useful for accurate assessment of tumours and is of particular value in determining surgical options and surgical planning. It is the imaging modality of choice for the investigation of skull masses and for determining the extent of lesions.

A 10 year old cross breed dog was presented with a fluctuant swelling of the left side of the face and stertorous breathing. The presumptive diagnosis (prior to imaging) was of a salivary mucocele and histological examination of a biopsy/ aspirate from the parotid salivary gland showed changes consistent with inflammatory disease. The swelling recurred following drainage and recurrence of the mucocoele was suspected. At this point MRI was performed to determine the cause of the swelling and evaluate the extent of the disease.

The MRI shows a multiloculated cystic mass on the left side of the head.

The mass is centred on the left temporomandibular joint with invasion of the adjacent muscles and subtle bone erosion.

Myxoid tumours often appear cystic and can resemble more benign cystic lesions. Myxosarcomas of the skull often appear to originate from the temporomandibular joints and may extend into the orbit. They may be confused with mucocoeles, as in this case, since aspiration of the mass produces a mucin rich fluid.

In this case MRI clearly defines the extent of the lesion and the invasion of the muscles and bone in combination with the solid, enhancing septae indicated a more aggressive lesion than mucoceole formation.