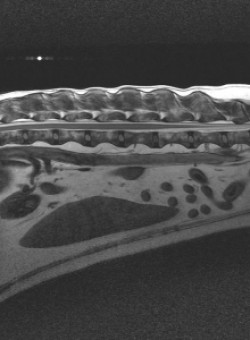 This dog was referred to the spinal clinic of a specialist orthopaedic referral centre with a history of right hind limb lameness.

Clinical examination showed femoral nerve deficits on the right which were confirmed on emg.

T2 weighted sagittal images (below) of the lumbar spine revealed normal well hydrated discs with no evidence of prolapse or protrusion.

STIR images in the dorsal plane showed diffuse high signal areas in the right side of the pelvis and para sagittal spinal musculature. A T2 weighted transverse series demonstrated a high signal lesion in the pelvic muscles with a linear signal void extending into the abdominal cavity (arrow). 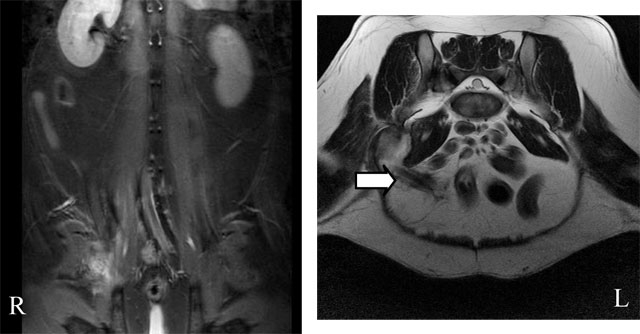 These images were suggestive of a foreign body (signal
void) with surrounding inflammatory tissue.

Post contrast images taken using a fat saturation pulse (below) confirm the appearance of a linear foreign body extending from the gut to the pelvis musculature with enhancement of the surrounding tissues.

It was felt that the MR appearance represented an ingested foreign body that had migrated into the muscles of the pelvis creating an area of infection affecting the femoral nerve. The dog was scheduled for a laparotomy.

The wooden stake pictured below which had perforated the jejunum, was successfully removed at surgery. 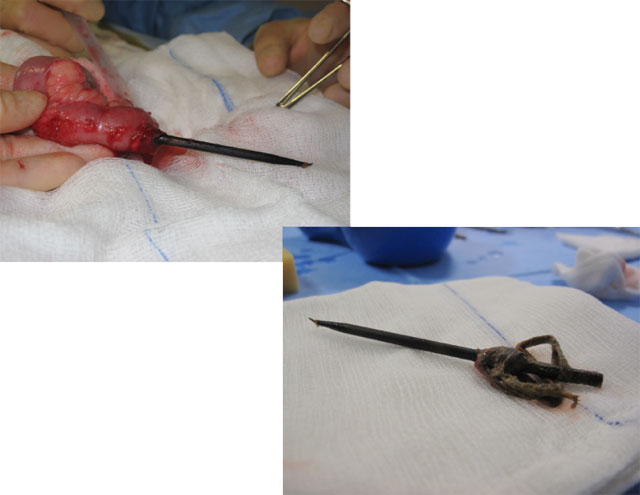